How are glass jars sealed? 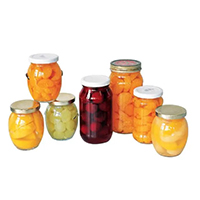 
After a series of operations such as cleaning the glass bottle, loading the materials into the glass bottle, and then entering the sealing process, we can't seal the bottle at once, but need to go through the pre sealing process, that is, the cap hook at the edge of the cap and the glass bottle are drawn under the hook of the can body by the roller in the can sealing machine, so that the cap and the bottle body can be hooked together, but not too tight, It is best that we can rotate the bottle freely but not fall off when we pick it up. Why does it need to be pre sealed? In a word, it is isolated from the outside to prevent pollution and facilitate tank exhaust.


After pre sealing, the air is exhausted, that is, the air brought in between the top of the can and the material during canning and the air in the raw material tissue cells are removed from the can as much as possible, so that a partial vacuum is formed in the top gap of the sealed can. This work is very important in the canning process, which is conducive to keeping the cans consistent and maintaining a good vacuum, and hindering the growth of microorganisms.

The final sealing process is when the air is exhausted. The roller of the tin can sealing machine is used to compress the edge of the cover of the rolled glass bottle, so that its gasket is tightly combined with the protruding part of the bottle, thus achieving a strong sealing performance. Most of the old cans are opened in this way, which is difficult to open, and even can only be opened by destroying the bottle cap.